Mightier than the sword

There is a critical moment that comes every single week; a moment that makes you feel powerless. When it hits you, it leaves you shattered, wondering about what you could have done differently to prevent it.

That’s when you find out you will not be getting your order on Friday, and you will have three whole days to think about it.

In my case, the order in question was a Wacom Intuos 3D, the fourth Wacom pen tablet I have owned. I used my three days to take a look back at my older models and reminisce about my story and relationship with these amazing pieces of technology.

It all started in 2005, when I first watched the video for Limp Bizkit’s “Home Sweet Home”. Around the half minute mark of the video, Wes Borland, the band’s guitarist, appears. He is using a pen tablet to digitally draw what looks a lot like the artwork on the cover of Limp Bizkit’s “Chocolate Starfish and the Hot Dog Flavored Water“. 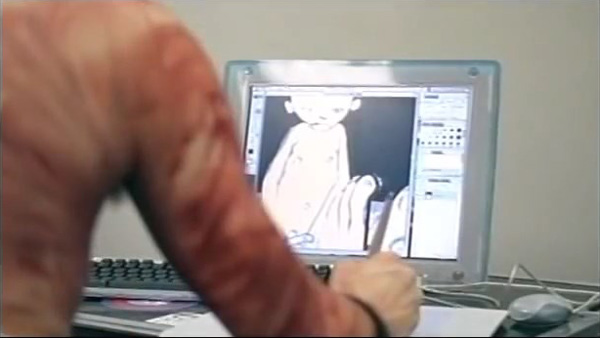 I was already a huge Wes Borland fan even beyond his music; so, when I saw this, I knew I had to get my hands on one.

My internet research reached a rather clear conclusion: You either buy a Wacom or you don’t buy a pen tablet, at all.

It wasn’t an easy decision for me. Wacom products have always been significantly more expensive than their “lesser” competition, and the 200 euro price tag isn’t low enough for something that you’ve never even tried before. It was a leap of faith.

So, this is how I bought my first pen tablet: the Wacom Graphire 4 XL. I ordered it directly on Wacom’s online shop – no Amazon Italia available at the time – and was stunned at how quickly it arrived via UPS from Germany. The box featured the picture of a little girl playing at the beach, along with the phrase “The easy way to better pictures” as this was, clearly, marketed towards photo editors. 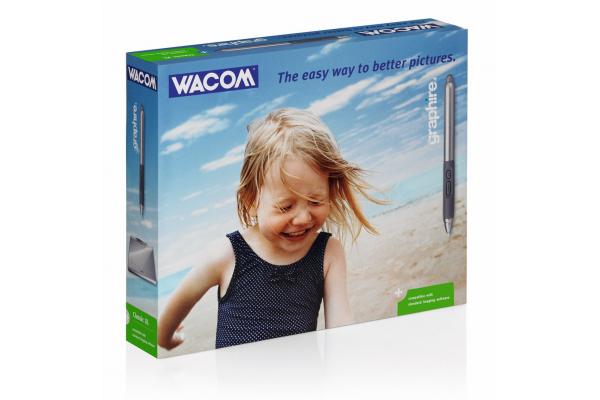 The Graphire was grey/silver under a removable transparent cover; you could put a piece of paper with a design under the cover, either to manually trace it with the pen, or for aesthetic reasons. God knows I’ve tried to do the former, but I’ve mainly used it for the latter. The first decoration I chose was Wes Borland’s own “tongue of Colicab” artwork; It felt right. 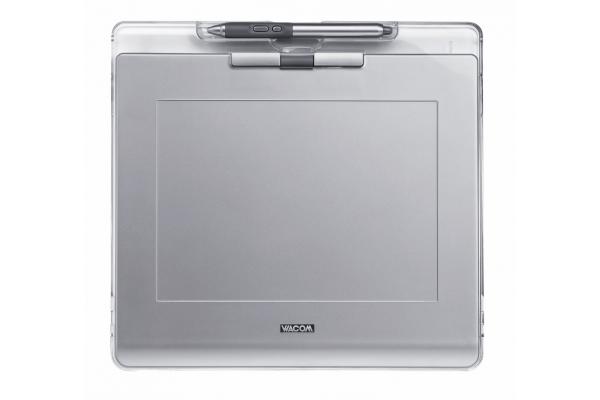 I honestly think that I’ve used that eraser once, maybe.

There were a few entirely new concepts I had to wrap my head around. First of all, the fact that the tablet registered the pen’s position and movement without the nib actually touching the surface, simply while hovering above it. Then, there was pressure sensitivity, giving a natural feel to all kinds of brush strokes. But the feature that completely blew me away was the tablet’s “pen mode“, i.e. an absolute correspondence between the tablet’s surface and the screen. This wasn’t a trackpad-style movement; I could now reach any point of the screen, instantly.

As soon as I unboxed and installed the tablet, the first thing I tried doing was digitally writing my signature. The result was so dreadful that made me think: “Great, I just threw 200 euros in the trash…”

Thankfully, that feeling didn’t last long. Working with the tablet became second nature and incredibly sped up all kinds of processes; it became clear that this relationship was going to last. Unfortunately, the same wasn’t true for the rubber parts of the tablet; those two literally melted away over time, making the pen almost impossible to hold. After temporarily mending the situation with some scotch tape, It was time for an upgrade.

The Bamboo started being marketed towards illustrators as well; you could immediately tell from the packaging, that now featured vibrant colors and fancy illustrations enclosing a few photographs. 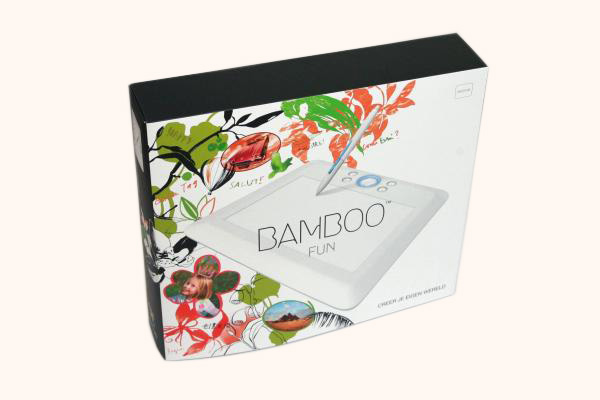 While maintaining the same functions as the Graphire, the Bamboo was all white, had no transparent cover, and every trace of that comfortable, yet frail rubber was gone. The pen was solid plastic and the scrolling/zooming function was now the job of a beautiful circular touch surface, illuminated by a blue ring that pulsed while the tablet was standing by. I remember how I used to say “look at it breathing…” 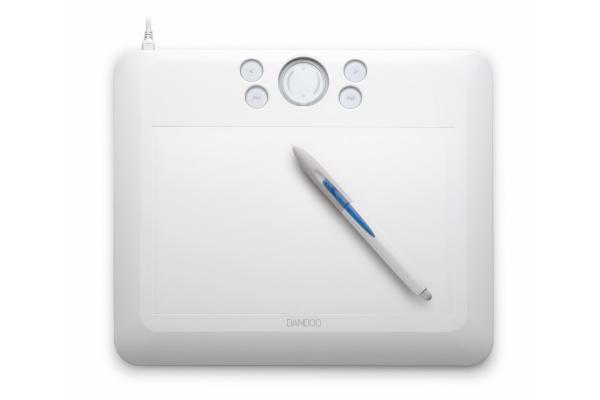 There were now four programmable expression keys and the cable was detachable. I found that to be a great call on Wacom’s behalf; you didn’t have to awkwardly wrap the cable around the tablet when carrying it with you.

That’s why I was surprised when they brought back the fixed cable for the Wacom Bamboo Pen & Touch (2nd generation), the tablet that succeeded the first Bamboo and my faithful graphic design companion for the last seven years. The transparent plastic cover on the Graphire actually provided protection to the point where the USB cable entered the device; that protection was not there on the Bamboo 2nd gen.

The tablet’s design was completely overhauled; the four expression keys were on the side of the active surface, giving the tablet a wider look. Its color was silver-grey,with a touch of white, like a mix of its ancestors, the Graphire and the 1st gen Bamboo. 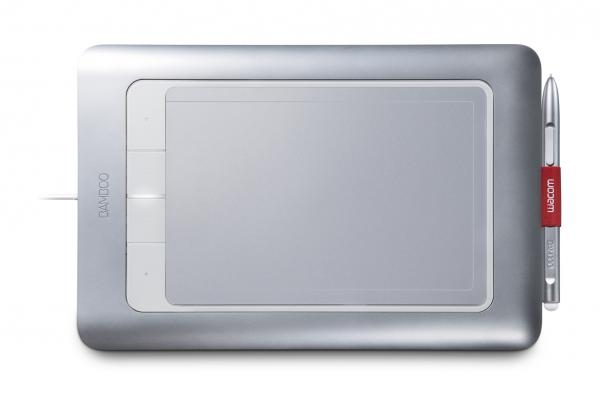 The greatest new feature was, as the name suggests, touch input. Now, the entire active surface could recognize multi-finger touch gestures, that enabled you to scroll, zoom in and out, rotate etc. I never got to like the touch features. My hands have always rested on the tablet while typing. So, whenever some erratic behavior would appear on screen, I would be “damn it, touch is on again“.

The greatest improvement – that I actually liked – was the material of the active surface, which was less slick than the previous ones, incredibly reducing the traction between the hand and the surface while drawing. Also, a small ribbon loop was now used to keep the pen firmly attached to the tablet.

I used to hate that little ribbon; in the beginning, I came very close to cutting it completely. In time, I began to appreciate its usefulness.

As I mentioned above, the fixed USB cable proved to be the Achilles heel of this mode, at least in my case. When I started to regularly carry the tablet in my backpack, it only took a few months to make it almost snap at its root. Naturally, I opened the tablet up and patched it with some insulation tape.

The writing was on the wall, though: It was time to move on.

I had already skipped the 3rd gen Bamboo and the first generation of Bamboo-turned-Intuos 2013 models, altogether. They simply felt like a redesign and, later, a rebranding of the Bamboo. Also, at the time, my 2nd gen Bamboo was still going strong.

But now, its flimsy cable made me take a closer look at the latest, Wacom Bamboo (2015) models, and they sure looked very interesting…

It is clear that Wacom has started to actively focus on the software bundle aspect, branding the same product in different ways, while simply changing the bundled software and, in some cases, the color scheme. In terms of value for money, the 3D bundle seems to be the best choice; it comes with a license of Pixologic’s ZBrush Core, which costs a little less than the tablet itself. So, if you at least care about 3D, this is definitely the way to go.

I’e already had the pleasure of using my Bamboo with Maxon’s Cinema 4D Studio R18 and the tablet simply takes the whole experience to a completely different level. It makes perfect sense that Wacom would want to appeal to 3D designers as well. 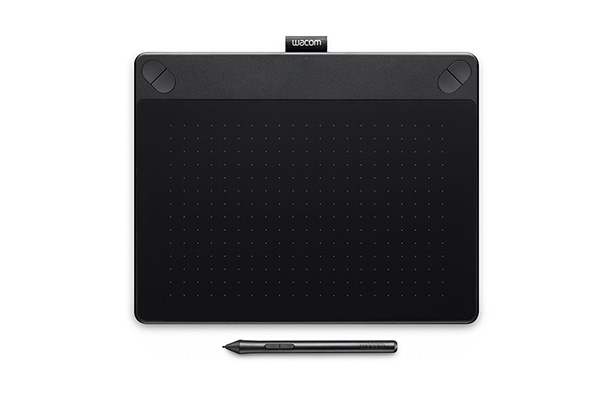 Regarding the hardware itself, it’s as if Wacom has been listening to my inner thoughts and redesigning some of the tablet’s aspects, accordingly. You can now enable and disable touch input using a physical switch on the tablet – a feature also available on the 2013 model – the pen doesn’t have an eraser anymore and the expression keys are smaller, minimizing the chance of accidental presses.

Accidental presses wouldn’t even matter though, since Wacom’s tablet properties software has been greatly upgraded as well. You can now program your expression keys specifically for every program you use. This is an excellent idea, as different modifiers – eg. alt, shift – do different things on different programs. Those customization options offer incredible versatility and give you the opportunity to make the most out of the tablet.

Last but not least, the all black design. In this darkness, the only things that elegantly stand out are the white Wacom logo on the black ribbon loop, a small white LED that indicates the tablet is powered and a grid of grey dots that covers the entire active area.

It looks and feels professional.

People have always referred to tablets of this price range as items “for beginners”; others have gone as far as calling them toys. Maybe the frivolous color schemes used by Wacom in the past for both the package and the tablets themselves have contributed to this as well.

I have always found these allegations to be completely ridiculous. First of all, these tablets are incredible pieces of hardware and absolute workhorses. Every single tablet I have owned is still perfectly functional – albeit with some aesthetic kinks. The Wacom Intuos 2015 models, just like their predecessors, are perfect for most graphic work; unless you’re exclusively a digital painter, you don’t really need a wider surface, 2048 pressure levels or tilt recognition, that the Intuos Pro line offers.

It’s not the tools you use, or how much you pay for them; it’s how you use them.

There. On to some graphics, then.